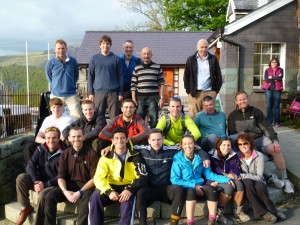 16 members of The Pickstock Group tackled the gruesome challenge of completing the National Three Peaks in memory of Martin Thorpe and in aid of Marie Curie Cancer Care.

Martin was a colleague and friend to many at The Pickstock Group; he died suddenly in 2011 after being diagnosed with cancer. Marie Curie Cancer Care allowed Martin to come home by providing him with a nurse who took care of him during his final days. Not only did the nurse help Martin but she also supported his family through the traumatic time. Marie Curie Cancer Nurses care for more than 31,000 patients and their families each year and thus they need to raise £13,000 for every hour of every day in order to fund their work.

The weekend of the 1st June saw members of The Pickstock Group complete the national Three Peak Challenge.

5PM saw the beginning of the long trek, 16 apprehensive walkers headed up the highest mountain in Britain, Ben Nevis.  Equipped with rucksacks, walking poles and an abundance of kendel mint cake, the summit seemed to be far away. 3 hours of uphill hiking on rocky terrain lead to the snowy summit of Ben Nevis, relief was surpassed by the knowledge that the descent was going to be equally as tough.

2 hours later the minibuses departed the Scottish Highlands to head to England’s highest Peak, Scafell Pike. A 6 hour drive through the night left many felling exhausted and the windy roads resulted in travel sickness. Never the less the challenge had to be completed and so the next hike began. Boulder rocks, running rivers, and a few fences needed to be faced before reaching the summit of a misty Scafell Pike. Two peaks down one left to go.

Sunday afternoon saw the 16 walkers plus the designated drivers all climb to the top of Snowdon.  Sheer determination and adrenalin overcame complete exhaustion and aching limbs allowing the team to clamber to the final peak. The end was in sight, a 2 hour long walk back down the mountain saw everyone complete the challenge within the 24 hours. Spirits were high and became higher when Katie Thorpe, Martin’s wife, greeted everyone with homemade cake.

Martin’s memory had been honoured and at first count over £20,000 had been raised for Marie Curie Cancer Care.