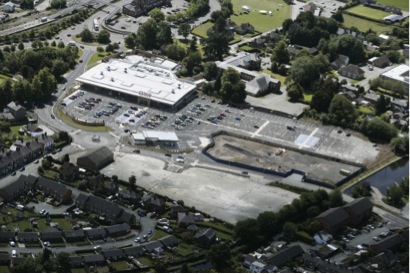 This was a major re-generation scheme which involved re-locating the former Welshpool Livestock Market and the delivery of a new 25,000 sq ft Tesco store on the Town Centre site. This re-development generated the value to deliver the new Market whilst drawing shoppers back into Welshpool, boosting the local economy.

The new Livestock Market, which is one of Europe’s largest, was built on a 16 acre site and has provided a 149,000 sq ft Market facility. The Market is fully compliant with new bio security and DEFRA legislation. J-Ross Developments Ltd devised the new Market upon complex land assembly and using their in-house building contracts, J R Pickstock Ltd they started the build in November 2008. It was completed and handed over to Welshpool Livestock Sales in October 2009.

J-Ross Developments worked closely with Welshpool Livestock Sales in the design of the new modern facility ensuring that the new Market was compliant with the current legislation, something the old site wasn’t. Strong partnerships were also formed with the Town Council, County Council and regional Government as well as liaising with national and local politicians.

Part of the scheme was to address traffic flow in Welshpool Town Centre. Meticulous traffic modelling and design, involving the Welsh Assembly Government Office and highways agency to deliver a new one way system to town.