Planners give go ahead for Livestock Market redevelopment scheme 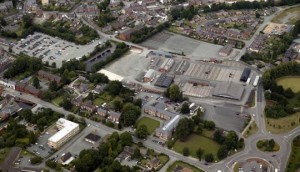 Meeting at Welshpool the planners agreed that the scheme would bring much needed improvement and employment to the town.

The plans approved include a Tesco store, non-food retail outlets, a canal side cafe/restaurant, a petrol station and parking for more than 400 vehicles on the Mill Lane site close to the town centre.

Mr Arfon Hughes, for Tesco, told yesterday’s planning committee meeting: “There has been a lot of consultations with residents, other groups, councillors and planning officers to achieve a layout that everyone is happy with.”

He added that the scheme “will bring much-needed improvements to the town’s shopping opportunities and will be a major provider of employment in Welshpool.”

The councillors heard that the scheme could create up to 400 jobs for Welshpool.

The go-ahead for the plans will now signal the start of the new town traffic management system, involving a one-way gyratory scheme around the town centre and will provide £300,000 for conservation work and community improvements.

The market, the biggest in Wales and one of the largest centres for the sale of prime breeding sheep in Europe, is being relocated a mile north of the town by Oswestry based J. Ross Development, with building work being undertaken by the company’s in-house contracting arm J.R. Pickstock Ltd.

There was unanimous support for the scheme. Welshpool Town Clerk Mr Robert Robinson said: “We are in full support of this development.”

Councillor Francesca Jump said a lot of time had been spent on getting the development right.

The final market will be held at the old site on Monday, November 2nd with the official opening of the new market on Friday, November 6.

Plans for a multimillion-pound shopping development, which could create 250 jobs, have been given the go-ahead by councillors in Powys.

A Tesco supermarket, five shops and a petrol station are earmarked for the site of a livestock market in Welshpool.

The market is relocating to the outskirts of the town and is expected to open next month.

Plans for the development were unveiled in 2006.

Tesco has plans for other stores in Powys at Machynlleth, Llandrindod Wells and Ystradgynlais, while a supermarket in Newtown is due to open later this year.

Proposals for a multi million pound Tesco development on Welshpool’s former Livestock Market site have been given the go-ahead by Powys County Council planners.
View clipping