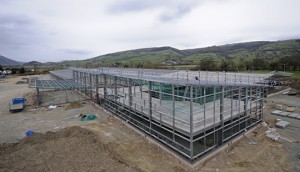 Politicians and farmers leaders have praised building progress on the re-development of one of Europe’s biggest one day livestock markets at Welshpool.
Work on the multi-million pound redevelopment of Welshpool Livestock Market began in mid-November 2008 and is on schedule for completion in October.
The market, the biggest in Wales and one of the largest centres for the sale of prime breeding sheep in Europe, is being relocated a mile north of the town by Oswestry based J. Ross Development, with building work being undertaken by the company’s in-house contracting arm J.R. Pickstock Ltd.
Farmers’ Union of Wales president Gareth Vaughan said: “It’s a wonderful development, a purpose-built livestock market with all the necessary animal welfare requirements, and well served by trunk road connections.
“We are well aware that the existing market at Welshpool attracts animals from as far afield as south Ceredigion and no doubt that custom will continue.
“I’m sure the new market will attract a large number of buyers for the excellent produce of farms in the area. The high quality of their livestock is second to none.”
Keith Davies, a partner in Welshpool Livestock Ltd, said he was looking forward to moving to the new home and praised the developers for bringing the scheme to fruition and overcoming planning obstacles.
“Obstacles which seemed impossible to overcome are now behind us and we will have a livestock market, of which we can be proud, capable of serving farmers from all over Wales and England,” he said
Montgomeryshire MP, Mr Lembit Opik said J. Ross were ‘performing a major miracle in the speed they were constructing the new market.’
“They are focussed and committed to a very high standard of finish and I’m sure it will become one of the leading livestock markets in Europe. It’s a credit to Welshpool and also to J. Ross, who are once again proving that when it comes to construction, they’re a world class business.”
Glyn Davies, Conservative parliamentary candidate for Montgomeryshire and a local farmer said the building was the start of a new chapter in the history of farming in the area. “I am a huge supporter of this scheme. It will be a superb boost for farming and the community. “The pace at which the development has started has captured the imagination of not just the faming community but the people of Welshpool too,” he added.
The scheme sees the developers delivering a new 149,000 sq ft livestock market on a 16 acre site, complying with new bio security and DEFRA legislation for Welshpool Livestock Sales Ltd.
The development sees the creation of 1,044 sheep and 200 cattle pens with additional penning available for annual one-day sale volumes.
In its town centre location will go a major retail development including a Tesco store, petrol station and canal side restaurant.
The scheme also include a traffic management system involving a one-way gyratory scheme around Welshpool town centre and will provide more than £300,000 for conservation work and community improvements. Andy Jones, Managing Director of J.R. Pickstock, said he was delighted that the scheme was getting off the ground so quickly. “It has taken us some considerable time to get to the building stage so it is particularly pleasing to see the development work moving so quickly,” he said. “Delivering the site on time to Welshpool Livestock Ltd is of paramount importance and it has been pleasing to see so much interest from the local community, farming organisations, farmers and local politicians.”
Shropshire Star
March 2009
Multi-million work on site under way

Work on a multi million pound transformation of Welshpool is well under way with the new livestock market taking shape.
The new market site, just off the A483 at the Buttington Cross Roundabout a mile north of the town should be completed by the end of October. The market is relocating to the site from its current position in Mill Lane.
It will free up land for a major retail development in the town centre.
A number of buildings on the new site, set to house animals on market days are starting to take shape – developers J-Ross Developments said. Work began at the site in mid-November following the official cutting of the first turf by Councillor Ann Holloway, Mayor of Welshpool, Lembit Opik Mp and Mark Kerr, former Chief Executive of Powys County Council.
Robert Robinson, Clerk to Welshpool Town Council, said work at the site was due to be completed by the end of October.
He said, “Developers on the Smithfield site are aiming for an end of October finish and once this has been completed work on the one-way system through Welshpool and the retail development can start.
“It should all be completed by the end of 2010 and then we can move on with the rest of it.”
Glyn Davies, Conservative Parliamentary candidate for Montgomeryshire said he was excited by the development. Mr Davies, a farmer from Berriew said,”It is the start of a new chapter in the history of Welshpool as well as a building project.
“I am a huge supporter of the development. This will be a superb boost for the farming community.”
The retail development in the town is expected to create up to 400 jobs and would mean a huge boost to the town’s economy.
Councillors in the town backed the scheme last year after carrying out a month long consultation period with the public.
The scheme will include a new Tesco supermarket, canalside restaurant and a filling station.
It will also see a new layout to many of the town’s streets in respect of parking and shopping.
The proposals also show a new hotel, possibly a Travelodge, and other commercial premises in Mill Lane and more shops on Church Street Car Park.

Work is well underway on the relocation of one of Europe’s biggest one-day livestock markets.
The multi-milion pound re-development of Welshpool Livestock Market began in mid-November 2008 and is on schedule for completion in October 2009.
The market is being moved a mile north of the town by Oswestry based J-Ross Developments, UK Property Developers.
The new 140,000 sq ft market will have 1,044 sheep and 200 cattle pens.
Keith Davies, a partner in Welshpool Livestock Sales, praised the developers for overdoming ‘impossible’ planning obstacles.
“They are now behind us and we will have a livestock market of which we can be proud,” he said.
The livestock market is part of a major re-development scheme including a Tesco store. There will also be a new one-way gyratory traffic scheme through Welshpool town centre.

A DEVELOPMENT which will transform the future of Welshpool has been granted outline planning permission.
Plans to redevelop the Smithfield Livestock Market were voted through unanimously by Powys County Council’s county planning committee on Tuesday afternoon.
The plans will see massive changes for Welshpool, including the re-organisation of the town’s road system.
The main development will see a 4,300 square metre foodstore created on the livestock site, along with 3,978 square metres of non-food retail warehousing, a 256 square metre canal side cafe/restaurant, a petrol station and 479 car parking spaces.
A pedestrian walkway will also be created from the livestock site over the former listed railway bridge over the canal to link with Church Street car park’s existing pedestrian walkway.
The plans to change the road system in Welshpool will see a through road built through Church Street Car Park, and a one way system through the town centre created.
There was some dispute over the route the road should take through Church Street Car Park with worries aired about the loss of car parking spaces.
It was suggested by Councillor Phil Pritchard that the plans be amended for the link road to meet the existing road through Church Street car park running along the south west side of the development.
However, head of planning Gareth Thomas said any attempt to change the route of the road would collapse the application entirely.
County councillor Richard Noyce said the proposal would present a major challenge to businesses inWelshpool, he said: “I feel this development offers real challenges for shops in the centre of Welshpool which have already received a large challenge from Coed y Dinas.
“I would hope that the business community in Welshpool will be encouraged to look on this opportunity as not being a detrimental challenge but offering an opportunity.”
Speaking in support of the plans, Spencer Cooper of J Ross Developments, the company behind the scheme, said: “These plans will bolster the rural economy. This is on the edge of the town centre and it will address leakage and bring people back to Welshpool to shop rather than go to Shrewsbury or Oswestry. I and my team are convinced this will have a truly positive effect on the town and the rural economy.”
County councillor Dawn Bailey said: “We owe it to the local people to bring this development forward. The charity shops we have at the moment have far more impact on the town centre than this development.”
County councillor Anne Holloway congratulated her fellow councillors on their decision, she said: “I would like to thank my colleagues for such a reasoned and fair debate.
“Two decades ago we made an awful mistake in the town. Do not make it again.”