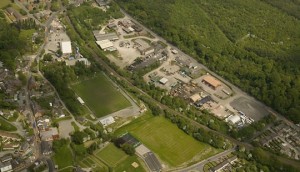 Planning application is being recommended to Wrexham Council for a major new football club facility funded by the re-development of the Cefn Druids Town Centre site for a new 25,000 sq ft (Net Sales) Tesco foodstore.
J Ross Development will be delivering a new club house, stadium and vastly improved playing surfaces for Cefn Druids Football Club on this new site on the periphery of Cefn Mawr. The scheme will include a coaching academy for young players and the club house can be used for corporate hospitality and private functions.
Planning Application due to be determined with the Town Centre Application in March 2009
The new facilities will be constructed by our in-house contracting business J R Pickstock Ltd.

THE future of one of the world’s oldest football clubs could be in jeopardy after a fresh row broke out this week.
Long-awaited proposals for a new Tesco superstore Plas Kynnaston, near Wrexham were deferred on Tuesday.
Under the plans, Newi Cefyn Druids Football Club would move to a new 5,000 capacity stadium a mile away, near to a disused quarry on the Rhosymedre to Plas Madoc Road.
But club officials anticipating the development were this week flummoxed when councillors delayed the scheme pending a site visit – even though it was recommended for approval.
It came after Cefyn councillor Howard Moysen raised issues with the Tesco store claiming it goes against planning policy and that people should do their shopping in Wrexham anyway.
But chairman of Cefn Druids, Brian Mackie said the delay could force the club out of the Welsh Premier League. “Evidence shows the scheme will generate more economic activity for local shops not less and Tesco has disproved the road capacity issue,” he said.
“There will also be more local jobs when we need them most.
“Coun Moysen will get the red card from our fans and fans of football in Wales.”
He added: “We are extremely concerned that a further delay or refusal could lead to us being forced out of the Welsh Premier League on ground criteria and thus lead to the closure of our football academy and sadly our future hangs in the balance.”
The delivery of the new football stadium is facilitated by the development of Druid’s existing ground for a new supermarket.
The two applications are linked meaning that it is impossible to have one without the other.
The proposed development will provide Druids with a UEFA compliant stadium that will incorporate a 500-seat stand with a modern clubhouse and car park.
They have been playing in the Welsh Premier League for 10 years, however due to UEFA licensing criteria the club will not be able to continue to play at their existing ground as it falls way short of the required standards.
The new 25,000-sq foot Tesco will create more than 140 jobs for the area.
Planning officers said they received 157 letters in support of the scheme and 33 against.
Councillors will carry out their site visit on March 13.

WREXHAM planners have deferred for a week a decision on a proposed supermarket development in Cefn Mawr, which would pave the way for NEWI Cefn Druids to move to a new stadium.
A Council planning meeting on Monday agreed to hold a decision until a visit to the site at Druids’ current Plas Kynaston home is made next week.
The plans for a new Tesco store include construction of a 500-seat stadium at nearby Rhosymedre and Druids’ chairman Brian Mackie (pictured) says the future of the club and its football academy “hangs in the balance” following the decision. 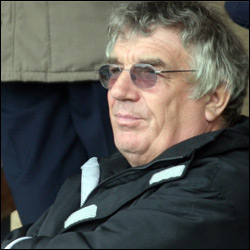 Local Councillor Moysen had indicated his support for the club but announced his opposition to the new store stating that it went against planning policy and that the people of Cefn Mawr should do their food shopping in Wrexham.
But Mackie says: “If we do not contest the statements of Councillor Moysen the future of the Cefn Druids and Youth Academy are in jeopardy.
“The actions of the Councillor are disgraceful, as he cannot back up any of his general claims. Evidence shows the scheme will generate more economic activity for local shops, not less, and Tesco has disproved the road capacity issue.
There will also be more local jobs when we need them most.
“Cllr Moysen will get the red card from our fans and the fans of football in Wales.
“We are extremely concerned that a further delay or refusal will lead to the club dropping out of the Welsh Premier League and the closure of the Football Academy; sadly our future hangs in the balance.”
The proposed development would provide the Druids with a category 3 compliant stadium that will satisfy current FAW and UEFA criteria, incorporating a 500-seater stand, together with a modern clubhouse and car park at an accessible location within the settlement boundary of Cefn Mawr and Rhosymedre.
The club’s position in the Premier League means UEFA provide funding towards their football academy programme, which offers coaching by fully qualified coaches for over 200 children of all ages in the Wrexham area. If the club drop out of the Welsh Premier League their funding from UEFA will be withdrawn and they will be forced to close the football academy. 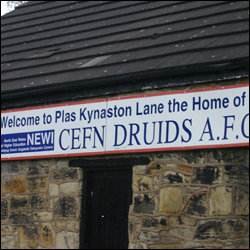 NEWI Cefn Druids have received a boost with the news that a controversial supermarket development on their Plas Kynaston Lane ground has been recommended for approval by Wrexham planners.
The application for a Tesco store will be considered by members of the planning committee next Monday.
In his report to the committee, chief planning officer Lawrence Isted recommends members should approve it, although the plan has caused a mixed reaction in Cefn Mawr since it was first unveiled.
Mr Isted says in his report that it has attracted 157 letters of support and 33 letters of objection.
In a separate report, the committee is also recommended to grant an application by J Ross Developments Ltd and Tesco Stores Ltd for the relocation of the Cefn Druids football ground, with the construction of a 500-seater stadium, clubhouse and TV gantry on land at Rock Road in nearby Rhosymedre.
If all goes well, Druids hope their new stadium will be ready in time for the season after next, when the Welsh Premier’s Super 10 is due to start.
But with developers keen to start work on the new supermarket as soon as possible, it may be necessary for the club to seek a temporary ground share next season, possibly at the well-equipped Queensway Athletics Stadium, which was used by Cymru Alliance outfit Gap Queens Park last year.