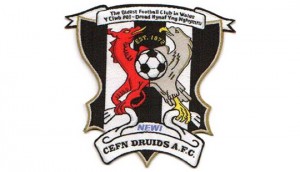 J Ross Developments sister company Elements Europe is entering into a sponsorship agreement with the oldest football club in Wales.

The move will see Welsh Premier League side Cefn Druids adopt the name of Elements Cefn Druids for the 2009/10 season.

The news comes in the wake of a decision by Wrexham Council to allow a Tesco foodstore to be built on the club’s Plaskynaston ground by Elements sister company J.Ross Developments. The club will be relocated to a nearby, purpose built, stadium with building work on both projects being undertaken by the company’s in-house contracting arm J.R. Pickstock Ltd. All three companies are part of the Oswestry based Pickstock Group.

The sponsorship deal was announced at the club’s end of season presentation night on Friday, May 29, when directors of the company were introduced to players, officials and supporters. The deal guarantees Elements Europe weekly television exposure on Sky, BBC and Welsh language channel S4C along with newspaper and web site coverage.

Cefn Druids chairman, Mr Brian Mackie, said: “Cefn Druids Football Club are delighted to announce that Elements Europe are to be the new club sponsors. “Following the decision by NEWI not to renew their sponsorship, the Board of Directors have been looking hard to find a replacement in difficult times.

“In Elements Europe we have found an ambitious company to match the club’s ambitions, moving forward eventually into our new stadium.

“We look forward to working with them next season and hope it will be the start of a fruitful partnership for both parties.”

Wayne Morgan, Managing Director of Elements Europe, said he hoped the partnership would be beneficial for both parties.

“Cefn Druids face a period of upheaval, leaving a ground they have occupied for over 60 years, and we are pleased that our sponsorship arrangement will help to make a smooth transition between old and new homes,” he said.

“The club faces a huge challenge to stay at the top level of Welsh football as new ground criteria are imposed by the Football Association of Wales. We will be ensuring that they have the best possible facilities in the new stadium.”