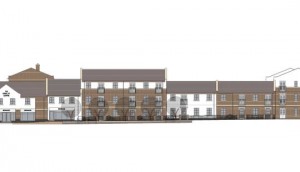 J Ross Developments has exchanged contracts with Telford & Wrekin Council to create a new centre which will transform a rundown part of Telford at Randlay.
About 90 jobs are set to be created when the firm builds a community centre, shops, houses and a residential care home.
If planning permission is granted, work could begin in the summer.
The residential care home will have 80 bedrooms and the plan includes the building of 18 new homes.

Telford & Wrekin Council has worked in close partnership with Hollinswood and Randlay Parish Council who are supporting the project and have contributed £75,000 towards the development.
Director Nick Scott, from J Ross Developments, UK Property Developers, said: “We are pleased to be working with Telford & Wrekin and the parish council to deliver this community based regeneration project, which is so important for the local centre at Randlay.
”The new local facilities and community centre will be our first focus, hopefully following the granting of planning consent for the application.
“Once these facilities are complete we will turn to the construction of the residential care home, which will further improve the quality of life for the elderly in the area.”
Construction work would take 12 to 18 months with between 50 and 70 people employed on site.
About 90 jobs would be created by the care home, of which about 80 per cent would be full-time.
Full consultation around the planning application is due to be held and a date for an exhibition and drop-in session will be announced.
Councillor Eric Carter, Telford¹s cabinet member for regeneration, said: ”Subject to planning consent, work on the development could start in the summer.”

Shropshire Councillors at Thursday nights Plans Board gave the green light for the start of work to redevelop Randlay Centre.
The application from J Ross Developments Ltd got the thumbs up for the demolition and re-construction of the existing local centre and the building of a new community centre, retail units and a 72 bed care home.
In addition 15 two-bedroom apartments and three one-bedroom apartments are planned. The existing ball court will be relocated.
The council will be doing various highway works, including sealing off the underpass that goes from the Randlay Centre to Whitworth Avenue under Randlay Avenue and replacing it with a new
pedestrian crossing with signals and widening the footpath along Randlay Avenue.
Cllr Eric Carter, Cabinet member for Regeneration said, “I am delighted this application has been granted consent, it heralds the start of an ambitious programme of regeneration for Randlay as part of Telford & Wrekin Council’s Borough Town’s Initiative. It will provide a range of important community facilities which will really benefit local residents.
He added “The council has worked closely with the developer and the Parish council in a bid to get the best possible development for the area

Plans to bulldoze Randlay Local Centre in Telford to make way for a multi-million pound development of new shops, a community centre, houses and apartments have been revealed.
The current community centre could be bulldozed to make way for a new facility, along with a replacement retail centre, costing up to £2 million. The existing underpass would be shut and a road crossing opened.
The site would also boast houses and apartments as part of the scheme.
Oswestry-based J Ross Developments has been appointed to transform the centre.
James Dunn, Telford & Wrekin Council asset and property officer, said: “The community facilities alone which will be provided will cost between £1.5 million and £2 million.
“That includes the construction of new shops, new community centre and closure of the underpass.”
The money has been raised through development agreements.
The regeneration scheme comes on the same day as council bosses revealed a £2.5 million five-year regeneration scheme for Telford’s six district centres and Newport Council bosses said the latest plans for Randlay come after a “rolling regeneration programme” was launched. The first plans to be unveiled as part of the scheme were for Malinslee, where up to £11 million will be spent on a new school including a community centre, along with a new doctors surgery, shops and play facilities.
Mr Dunn said a public consultation held last month in Malinslee was “very positive”.
Residents are invited to have their say on the plans for Randlay at a public consultation meeting at Randlay Community Centre on March 15, from 3.30-7pm.
Councillor Ute Sambruck, Telford & Wrekin Council member for The Nedge ward, said: “I think it will be excellent for the people of Randlay. I’m thrilled it’s finally going ahead.”
David Morgan, council spokesman, said: “It is a multi-million pound rolling regeneration programme to regenerate the centres in Telford. It is now a question of what do people want. That is the reason for these public consultation meetings.”